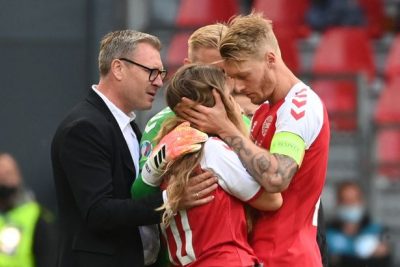 Simon Kjaer is being considered for the captain’s armband at AC Milan after helping to save Denmark team-mate Christian Eriksen.

The defender was the first to reach the 29-year-old after he collapsed on the pitch during their country’s Euro 2020 clash against Finland on Saturday.

Denmark’s 32-year-old defender ran towards him, stabilised him on his back, cleared his airways and started CPR before medics arrived.

He then encouraged his team-mates to form a wall around Eriksen to ensure he received privacy during the distressing time.

And Italian outlet SportMediaset have reported that it has sparked some thoughts at Kjaer’s club side for a new leadership role.

Current AC Milan captain Alessio Romagnoli is not a regular starter at the club anymore while goalkeeper Donnarumma appears to be on the way out of the San Siro.

And the report states that the club’s legendary sporting director Paolo Maldini is also keen on making Kjaer captain following his reaction to Eriksen’s collapse.

The centre-back was also seen comforting Eriksen’s partner, Sabrina Kvist Jensen, at the side of the pitch as he received medical treatment.

The 32-year-old, captaining Denmark against Finland, was first to Eriksen when he collapsed, turning him on his side and performing cpr

Denmark’s ex-Tottenham midfielder was taken to hospital and is now in a stable condition, UEFA confirmed.

And the 29-year-old has given a statement just 48 hours after the collapse, looking to reassure fans around the world.

Eriksen’s sentiments were relayed to the press by his national team manager Kasper Hjulmand, who revealed that the midfielder said: “Thank you, I won’t give up. I feel better now – but I want to understand what’s happened. I want to say thank you all for what you did for me.”

With changes expected at AC Milan, they are keen to give him the captain’s armband after taking a leading role during the incident

Kjaer has since been praised as a “hero” by fans following his part in making sure the Danish star was in the correct position when the paramedics arrived.

While Piers Morgan wrote on Twitter: “Denmark’s captain ⁦@simonkjaer1989 ensured Eriksen didn’t swallow his tongue when he was unconscious, gave him CPR, told the squad to form a protective shield around him, consoled Eriksen’s horrified wife & has now led his team back into the game.

Kjaer has been at AC since January 2020, initially making a loan move from Sevilla before moving permanently over the summer.

Atiku, Goodluck Jonathan, Sambo, Osinbajo And The Office Of The Vice President